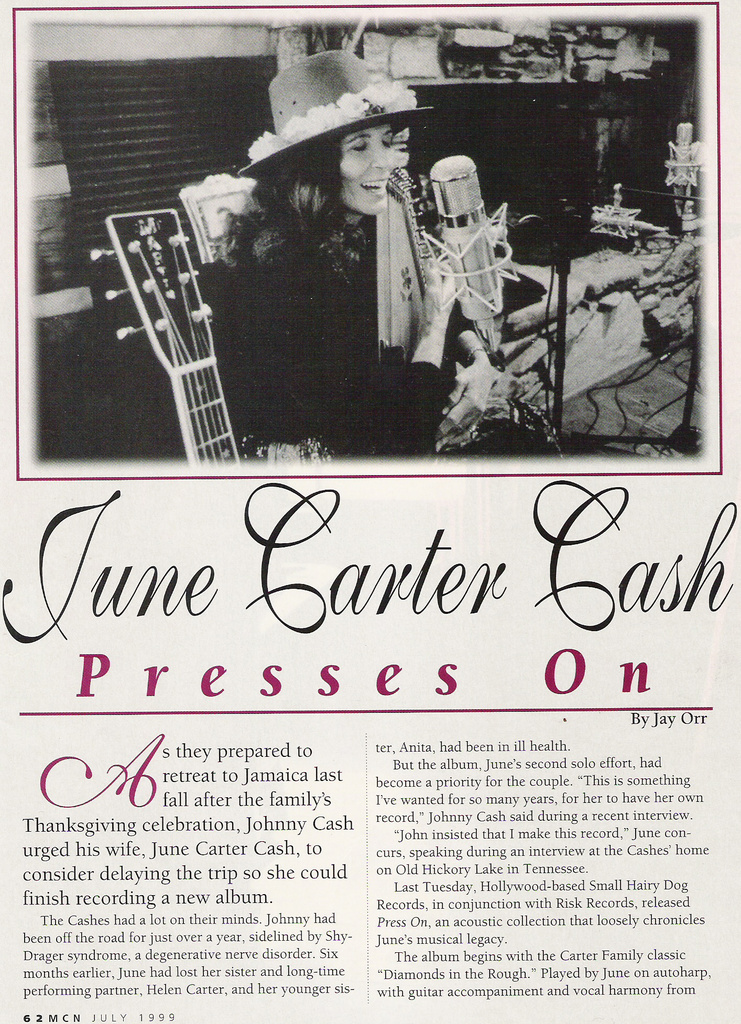 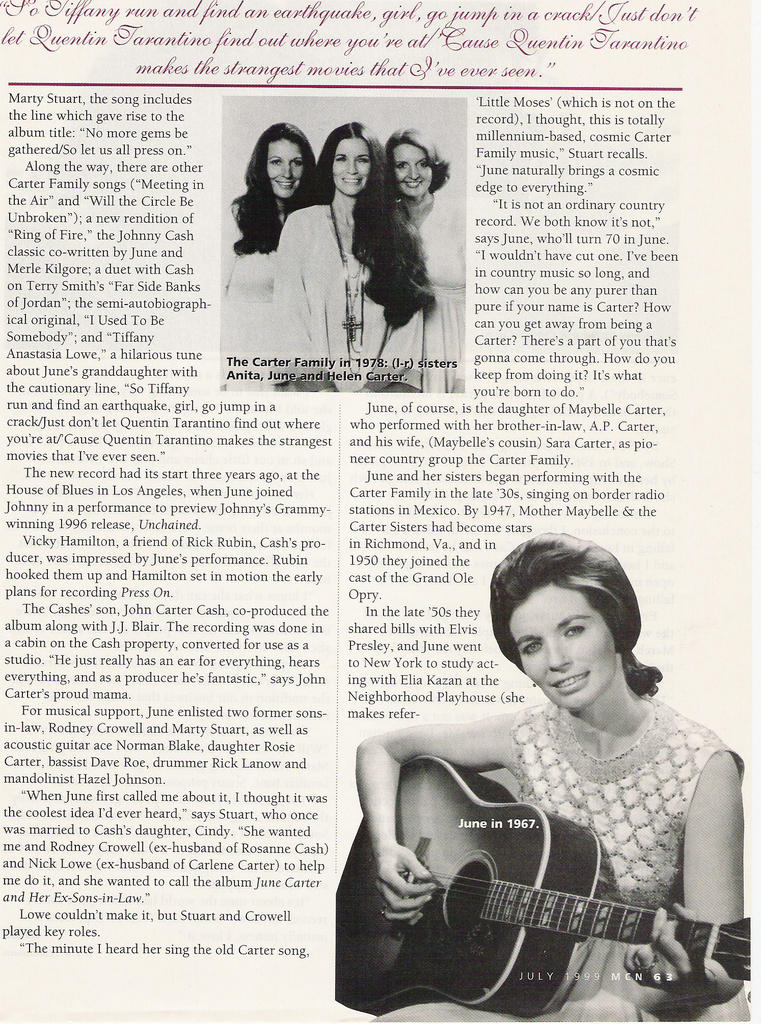 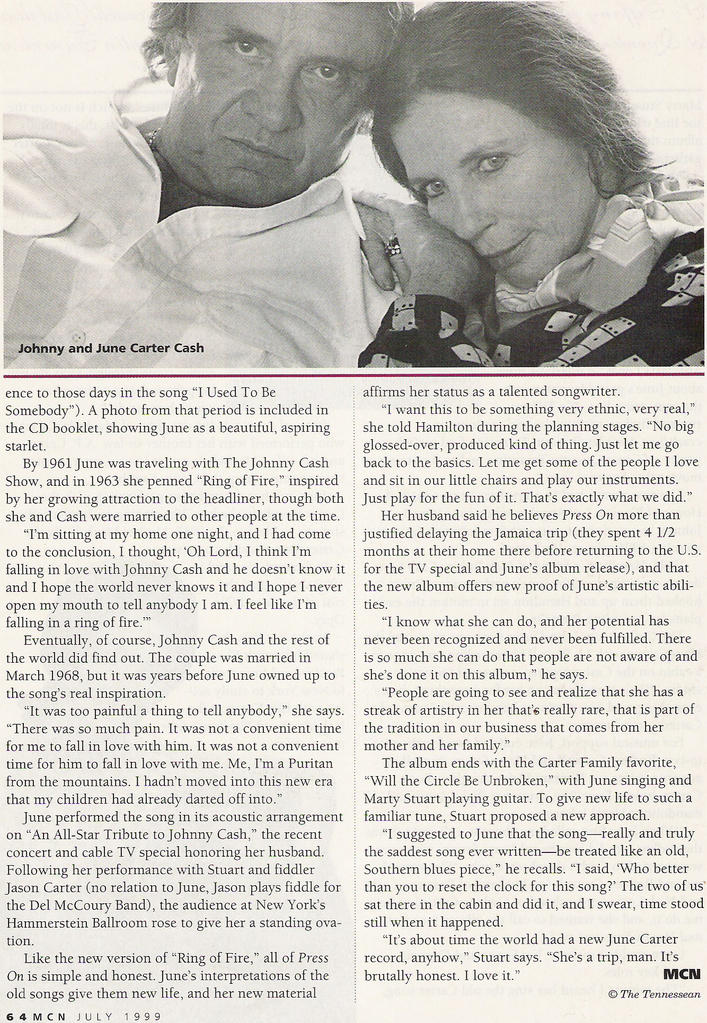 AS they prepared to retreat to Jamaica last fall after the family's Thanksgiving celebration, Johnny Cash urged his wife, June Carter Cash, to consider delaying the trup so she could finish recording a new album.

The Cashes had a lot on their minds. Johnny had been off the road for just over a year, sidelined by Shy-Drager syndrome, a degenrative nerve disorder. Six months earlier, June had lost her sister and long-time performing partner, Helen Carter, and her younger siser, Anita, had been in ill health.

But the album, June's second solo effort, had become a priority for the couple. "This is something I've wanted for so many years, for her to have her own record," Johnny Cash said during a recent interview.

"John insisted that I make this record," June concurs, speaking during an interview at the Cashes' home on Old Hickory Lake in Tennessee.

The album begins with the Carter Family classic "Diamonds in the Rough." Played by June on autohapr, with guitar accompaniment and vocal harmony from Marty Stuart, the song includes the line which gave rise to the album title: "No more gems be gathered/So let us all press on."

Along the way, there are other Carter Family songs ("Meeting in the Air and "Will the Circle Be Unbroken"); a new rendition of "Ring of Fire," the Johnny Cash classic co-written by June and Merle Kilgore; a duet with Cash on Terry Smith's "Far Side Banks of Jordan"; the semi-autobiographical original, "I Used to be Somebody," and "Tiffany Anastasia Lowe," a hilarious tune about June's grandaughter with the cautionay line, "So Tiffany run and find an earthquake girl, go jump in a crack/Just don't let Quentin Tarantino find out where you're at/Cause Quentin Tarantino makes the strangest movies that I've ever seen."

The new record had its start three years ago, at the House of the Blues in Los Angeles, when June joined Johnny in a performance to preview Johnny's Grammy-winning 1996 release, Unchained.

Vicky Hamilton, a friend of Rick Rubin, Cash's producer, was impressed by June's performance. Rubin hooked them up and Hamilton set in motion the early plans for recordings Press On.

The Cashes' son, John Carter Cash, co-produced the album along with J.J. Blair. The recording was done in a cabin on the Cash property, converted for use as a studio. "He just really has an ear for everything, hears everything, and as a producer he's fantastic," says John Carter's proud mama.

"When June first called me about it, I thought it was the coolest idea I'd ever heard," says Stuart, who once was married to Cash's daughter, Cindy. "She wanted me and Rodney Crowel )ex-husband of Rosanne Cash) and Nick Lowe (ex-husband of Carlene Carter) to help me do it, and she wanted to call the album June Carter and Her Ex-Sons-In-Law."

"The minute I heard her sing the old Carter song 'Little Moses' (which is not on the record), I thought, this is totally millenium-based, cosmic Carter Family music," Stuart recalls. "June naturally brings a cosmic edge to everything."

"It is not an ordinary country record. We both know it's not," says June, who'll tun 70 in June. "I wouldn't have cut one. I've been in country music so long, and how can you be any purer than pure if your name is Carter? How can you get away from being a Carter? There's a part of you that's gonna come through. How do you keep from doing it? It's what you're born to do."

June, of course, is the daughter of Maybelle Carter, who performed with her brother-in-law, A.P. Carter, and his wife (Maybelle's cousin) Sara Carter, as pioneer country group the Carter Family.

June and her sisters began performing with the Carter Family in the late '30s, singing on border radio stations in Mexico. By 1947, Mother Maybelle & the Carter Sisters had become stars in Richmond, Va., and in 1950 they joined the cast of the Grand Ole Opry.

In the late '50s they shared bills with Elvis Presley, and June went to New York to study acting with Elia Kazan at the Neighborhood Playhouse (she makes reference to those days in the song "I Used To Be Somebody"). A photo from that period is included in the CD booklet, showing June as a beautiful, aspiring starlet.

By 1961 June was traveling with The Johnny Cash Show, and in 1963 she penned "Ring of Fire," inspires by her growing attraction to the headliner, though both she and Cash were married to other people at the time.

"I'm sitting at my home one night, and I had come to the conlusion, I thought 'Oh, Lord, I think I'm falling in love with Johnny Cash and he doesn't know it and I hope the world never knows it and I hope I never open my mouth to tell anybody I am. I feel like I'm falling in a ring of fire.'"

Eventually, or course, Johnny Cash and the rest of the world did find out. The couple was married in March 1968, but it was years before June owned up to the song's real inspiration.

June performed the song in its acoustic arrangement on "An All-Star Tribute to Johnny Cash," the recent concert and cable TV special honoring her husband. Following her performance with Stuart and fiddler Jason Carter (no relation to June, Jason plays fiddle for the Del McCoury Band), the audience at New York's Hammerstein Ballroom rose to give her a standing ovation.

Like the new version of "Ring of Fire," all of Press On is simple and honest. June's interpretations of the old songs give them new life, and her material affrims her status as a talented songwriter.

"I want this to be something very ethnic, very real," she told Hamilton during the planning stages. "No big glossed-over produced kind of thing. Just let me go back to the basics. Let me get some of the people I love and sit in our little chairs and play our instruments. Just play for the fun of it. That's exactly what we did."

Her husband said he believes Press On more than justified delaying the Jamaica trip (they spent 4 1/2 months at their home there before returning to the U.S. for the TV special and June's album release), and that the new album offers new proof of June's artistic abilities.

"I know what she can do, and her potential has never been recognized and never been fulfilled. There is so much she can do that people are not aware of and she's done it on this album," he says.

"People are going to see and realize that she has a streak of artistry in her that's really rare, that is part of the tradition in our business that comes from her mother and her family."

The album ends with the Carter Family favorite, "Will the Circle Be Unbroken," with June singing and Marty Staurt playing guitar. TO give new life to such a familiar tune, Stuart proposed a new approach.

"I suggested to June that the song-really and truly the saddest song ever written-be treated like an old, Southern blues piece," he recalls. "I said, 'Who better than you to reset the clock for this song?' The two of us sat there in the cabin and did it, and I swear, time stood still when it happened.

"It's about time the world had a new June Carter record, anyhow," Stuart says. "She's a trip, man. It's brutally honest. I love it."