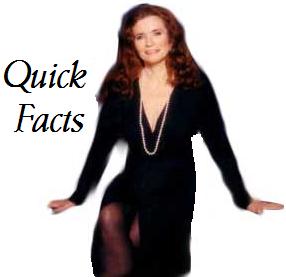 June briefly flirted with James Dean in the mid 50s. All she'd ever say was "he gave me a rose once".

June was the first Carter to have a top ten hit on the charts. It was for "Baby, It's Cold Outside" recorded with Homer & Jethro in 1949.

June turned down an opportunity to be on a variety show that had Woody Allen as one of it's writers in favor of going on her first tour with Johnny Cash in 1962.

June is the only person to have a mother, aunt, uncle, husband and ex-husband all in the Country Music Hall of Fame.

The first time Johnny Cash met June Carter was at The Grand Ole Opry in 1956; while talking with her he told her he was going to marry her one day.

June had a special knack for comedy and invented a country character called "Aunt Polly".

In the late 50s June was managed by Colonel Tom Parker and opened for Elvis Presley.

The first time June ever performed was in 1939 at the age of nine on Border Radio. She sang the song Engine 143 and played the auto-harp.