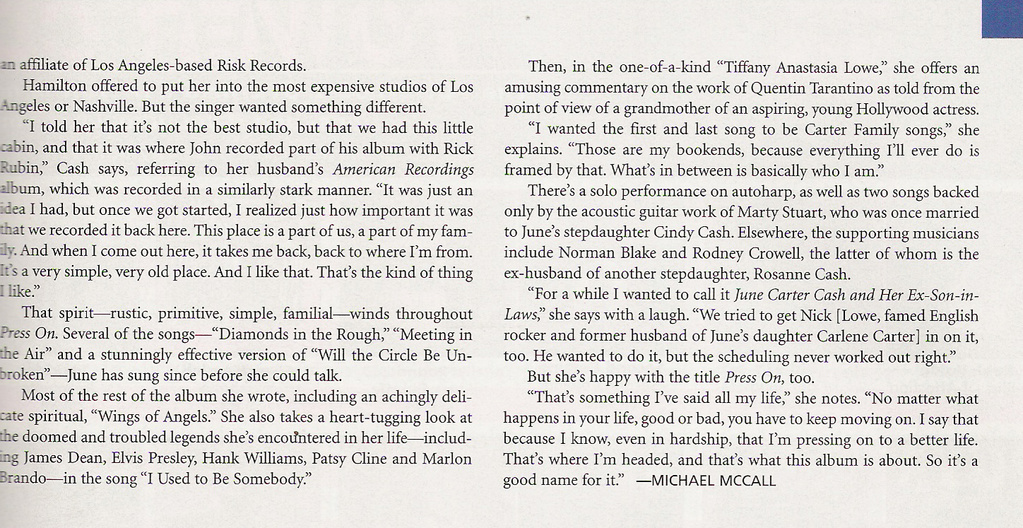 June Carter Cash eases a black Mercedes sedan along a thin strip of dirt road, portions of which are not as wide as the German car's wheel base. As she gently navigates the winding curves and harsh bumps, she explains that she and her famous husband--whom she calls John--keep an old cabin on the Cash compound in Hendersonville, Tenn., as a personal refuge.

"It isn't anything fancy, just a small, ol' log cabin," says the Cash family matriarch, who is wearing a wide-brimmed, summer straw hat laced with flowers and elegantly layered Western-styled clothes. "We put it back here so that when things got too tough we could run in here and go back about 100 or 150 years. Both of us grew up like that, so that's why we like it so much. And we wanted our son John Carter to be able to shovel chicken manure as he grew up. We thought it would give him character."

Located on an undeveloped expanse of woodland across form the couple's sprawling, lakeside home, the cabin served as June Carter Cash's recording studio for the making of Press On, her first solo album in 25 years. Like the woodlands surrounding the out-of-the-way cabin, the recording is primitive yet teeming with life. It's packed with spirituals, old Carter Family standards and several slice-of-life originals that represent the singer's unfiltered, and sometimes hilarious, views about her life and about what's been important to her.

"It's an honest performance," she says of the recording. "The records I hear anymore [sic] are so slick. What we wanted was something that was real."

The project was initiated at the insistence of former Guns N' Roses associate Vicki Hamilton, who saw Carter perform a song during a Johnny Cash show in Los Angeles and later sought her out to goad her into making an album of her own. Hamilton made the 70-year-old former Grand Ole Opry star the debut artist for her new indie label, Small Hairy Dog Records, an affiliate of Los Angeles-based Risk Records.

Hamilton offered to put her into the most expensive studios of Los Angeles or Nashville. But the singer wanted something different.

"I told her that it's not the best studio, but that we had this little cabin, and that it was where John recorded part of his album with Rick Rubin," Cash says, referring to her husband's American Recordings album, which was recorded in a similarly stark manner. "It was just an idea I had, but once we got started, I realized how important it was that we recorded back here. This place is a part of us, a part of my family. And when I come here, it takes me back, back to where I'm from. It's a very simple, very old place. And I like that. That's the kind of thing I like."

That spirit-rustic, primitive, simple, familial-winds throughout Press On. Several songs-"Diamonds in the Rough," "Meeting in the AIr" and a stunningly effective version of "Will the Circle Be Unbroken"-June has sung since before she could talk.

Most of the rest of the album she wrote, including an achingly delicate spiritual, "Wings of Angels." She also takes a heart-tugging look at the doomed and troubled legends she's encountered in her life-including James Dean, Elvis Presley, Hank Williams, Patsy Cline and Marlon Brando-in the song "I Used to Be Somebody."

Then, in a one-of-a-kind "Tiffany Anastasia Lowe," she offers an amusing commentary on the work of Quentin Tarantino as told from the point of view of a grandmother of an aspiring, young Hollywood actress.

"I wanted the first and last song to be Carter Family songs," she explains. "Those are my bookends, because everything I'll ever do is framed by that. What's in between is basically who I am."

There's a solo performance on autoharp, as well as two songs backed only by the acoustic guitar work of Marty Stuart, who was once married to June's stepdaughter Cindy Cash. Elsewhere, the supporting musicians include Norman Blake and Rodney Crowell, the latter of whom is the ex-husband of another stepdaughter, Rosanne Cash.

"For a while I wanted to call it June Carter and Her Ex-Son-in-Laws," she says with a laugh. "We tried to get Nick [Lowe, famed English rocker and former husband of June's daughter Carlene Carter] on it, too. He wanted to do it, but the scheduling never worked out right."

But she's happy with the title Press On, too.

"That's something I've said all my life," she notes. "No matter what happens in your life, good or bad, you have to keep moving on. I say that because I know, even in hardship, that I'm pressing on to a better life. That's where I'm headed, and that's what this album is about. So it's a good name for it." -Michael MCCall